Evita se Perron in Darling will once again present Xmas in July.

It’s that time of the year again. July. It’s cold and wet, with a crackling fire in the room, excellent wine and good food adding to the comfort and joy. It’s time to laugh at the crazy state of our world while wearing funny paper hats and singing about the 12 Days to Christmas.

But it’s not December when it’s hot and sticky and your nose is peeling and the last thing you have time for is to sit and just enjoy life. Tannie Evita Bezuidenhout has been celebrating friendship and fun at Evita se Perron for some years now, highlighted with her Christmas show during the month of July.

Xmas in July 2011 is even more special – she has created a price to suit most pockets with show tickets at R114 per person. Groups of 50 and more cost R80pp.

There have been numerous enquiries, especially from overseas, regarding how to order a copy of Tannie Evita Bezuidenhout’s new cookbook ‘Evita’s Kossie Sikelela’ (ook beskikbaar in Afrikaans as ‘Evita’s se Kossie Sikelela’).

Well Darling’s much loved bookshop, Book League, has come to the rescue. They will post you an autographed copy of the book anywhere in the world! Or pick up a copy in-store (they are located in the Mantis Mall, next to the Darling police station).

Cost:
R150.00 + R30 postage in South Africa
For worldwide delivery contact Book League at bookleague@telkomsa.net or tel +27 (0)22 492 2667.
(Alternatively, unsigned books will be for sale in leading bookshops throughout South Africa.)

See below for details of the book launch.

You are invited to the launch of Evita’s Kossie Sikelela/Evita se Kossie Sikelela – the South African cookbook that only Tannie Evita could have produced!

If the road to reconciliation runs through a country’s belly, Evita’s Kossie Sikelela cookbook provides its recipe for peace. She invites the whole country, the whole world, to her table where everybody can feast on dishes like green bean bredie and cumin chicken with sweet potatoes. Who’ll be able to moan and groan between mouthfuls of walnut balls and pampoenkoekies, or baked apple clowns? Truly, there’s nothing like a generous helping of rabbit in red wine or guinea fowl with sultanas & hanepoot to bring forth brotherly love.

And liewe aarde, you will definitely want to be best friends with the orange trifle and Tannie’s melktert. Evita is always well prepared and includes recipes for diabetics and vegetarians, Halaal and Kosher dishes, and even recipes to keep as fit as she does.

Whether she entertains her grandchildren, caters for a picnic or plans a Christmas menu, Evita cooks up a storm.

Richly illustrated by artist Linda Vicquery, the expert behind the dishes.

Also included: many photographs of Evita and a preface by none other than Sophia Loren. Unfolded, the dust jacket is a laminated full-colour poster.

For many years in the old South Africa, Evita Bezuidenhout had been the ambassadress of the bantustan Bapetikosweti. In the new democratic South Africa she is still the most famous white woman in SA and often finds herself in the company of the powerful and famous.

Pieter-Dirk Uys lives, like Evita, in Darling. He is a well-known playwright and has for decades created memorable characters for one-man shows here and abroad. He is also an Aids activist and promotes safe-sex to teenagers.

Linda Vicquery is a chef and painter. She used to design books for Tafelberg-Uitgewers. She now lives in the south of France. 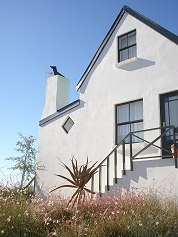